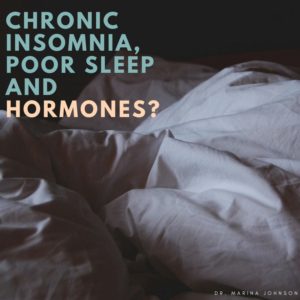 Bonnie has always been able to enjoy good sleep in the past. No matter how stressed she might be, she could count on laying her head on her pillow, falling fast asleep and waking up the next morning refreshed and rejuvenated. However, when she reached her mid 40’s, her periods started changing and she began experiencing sleep problems. First, she would just have insomnia the night before starting her period. As her periods became more irregular, she started waking up in the middle of the night around 2 or 3 am and would find herself wide awake and unable to go back to sleep. With so little sleep, she would be exhausted the next morning. Over-the-counter sleep aids would make her feel sluggish the following day. By the afternoon and early evening, she would be crashing. She came to see me on maximal doses of prescription sleep medicine and still was sleeping poorly.

Bonnie suffered from a very common sleep disorder that occurs with declining levels of estrogen and/or progesterone that accompany perimenopause and/or menopause. It is characterized by wakefulness in the middle of the night and can be very debilitating when it continues long-term. The typical patient with this type of insomnia often becomes addicted to prescription sleeping pills. Bonnie’s insomnia totally resolved after her estrogen and progesterone levels were normalized.

While menopause occurs in all women, insomnia does not uniformly affect all women and therefore, women may not recognize that this is a low estrogen symptom. Furthermore, if the insomnia has gone on for many years, other secondary conditions such as depression, anxiety, chronic fatigue, fibromyalgia, sleep apnea and obesity may develop.

It’s important to emphasize that insomnia can result from endocrine problems in both men and women. Disorders of thyroid hormone, testosterone, cortisol, and growth hormone can all cause sleep disorders. Detecting a subtle endocrine imbalance may sometimes be difficult requiring the expertise of an endocrinologist.

Sleep is a mysterious bodily process that is absolutely essential to good health. We should not have to rely on a drug to make us sleep! We do not have to be “taught” how to sleep. Every member of the animal kingdom has an obligatory need for sleep. If humans go much more than 18 hours without sleep, they start experiencing “microsleep” where they “zone out” from a few seconds to minutes. In fact many accidents occur when people are sleep-deprived – such as the infamous Exxon Valdez disaster and the Chernobyl nuclear accident. Falling asleep while driving is responsible for at least 100,000 crashes, 40,000 injuries, and 1550 deaths per year.

People can also develop insomnia from poor lifestyle choices. Overzealous Americans intent on squeezing more work, more fun, more family time and more sheer activity into their lives often short-change their sleep. What are ways to promote a good night’s sleep? Try going to bed at the same time each night and getting up at the same time. The body likes a regular schedule. Sleep in a cool, dark room – use nightshades, white noise or a sleep mask if necessary. Avoid spicy food or caffeine-containing foods in the evening. Finish eating at least 3 hours before bedtime. Many individuals find that heavy intake of sugar or alcohol at dinner leads to restless sleep. Start winding down in the evening. Do not engage in heavy exercise late at night. Don’t watch the 10 o’clock news or read grisly books which cause mental over-stimulation. Individuals who can’t function without a large dose of coffee in the morning are usually sleep-deprived.

Just how much sleep is enough sleep? Individuals who consistently get less than seven or eight hours of sleep per night are often sleep-deprived. Interestingly, people who need MORE than eight hours of sleep may also have a sleep disorder. They need more than eight hours of sleep because the sleep they are getting is poor quality sleep. People do not have less need for sleep with aging. It’s just that sleep disorders are so common in older people. Most sleeping pills will knock you out but do not tend to promote normal sleep architecture. There are now new sleep agents that promote the deep sleep, which tends to be more restorative.

If you are experiencing persistent insomnia, consider seeing an endocrinologist, a physician who specializes in hormone disorders. Establishing hormone balance can lead to normal, refreshing sleep which is the body’s own way of healing a myriad of health problems.

One of the world’s longest and largest trials of hormone replacement therapy (HRT) has found that post-menopausal women on HRT gain significant improvements in quality of life.

The results of the latest study by the WISDOM research team (Women’s International Study of long Duration Oestrogen after Menopause) are published August 22 on the British Medical Journal website.

The study involved 2130 post-menopausal women in the UK, Australia and New Zealand, and assessed the impact of combined oestrogen and progestogen hormone therapy on the women’s quality of life. The average age of women in this study was 13 years after menopause and most participants did not have menopausal symptoms.

“Our results show that hot flushes, night sweats, sleeplessness and joint pains were less common in women on HRT in this age group. Sexuality was also improved,” says Professor Alastair MacLennan, leader of the Australian arm of WISDOM and head of Obstetrics & Gynaecology at the University of Adelaide, Australia.

“Overall, quality of life measures improved. Even when women did not have hot flushes and were well past menopause, there was a small but measurable improvement in quality of life and a noted improvement in sleep, sexuality and joint pains. HRT users also had more breast tenderness and discharge compared to those on a placebo,” he says.

Dr Beverley Lawton, Head of WISDOM New Zealand, says: “These new data should be added to the risk/benefit equation for HRT. The quality of life benefits of HRT may be greater in women with more severe symptoms near menopause. New research suggests that HRT taken from near menopause avoids the cardiovascular risks seen when HRT is initiated many years after menopause.”
Professor MacLennan says studies such as those conducted by WISDOM “enable the risks of HRT to be reduced and its benefits maximized when the treatment is individualized to each woman”.

“Early start-up side effects can usually be alleviated by adjusting the treatment,” he says. “For most women with significant menopause symptoms the benefits of HRT outweigh the risks. The latest analyses of the main long-term randomized control trial of HRT (The Women’s Health Initiative) show that breast cancer is not increased by oestrogen-only HRT and is only increased in women using combined oestrogen and progestogen HRT after seven years of use. This increased risk is less than 0.1% per year of use.

“If a woman feels that HRT is needed for quality of life, then doctors can find the safest regimen for her. She can try going off HRT every 4-5 years, and can then make an informed choice about whether she takes and continues HRT.”
The WISDOM research is independent of the pharmaceutical industry and has been funded by UK, Australian and New Zealand government research bodies.
________________________________________
Story Source:
Materials provided by University of Adelaide.

As of January 1, 2023, Bella Vita Medical Center is now Renew Health and Wellness. The clinic will continue providing hormone therapy and other wellness services, with additional services and capabilities coming soon! We welcome existing patients and appreciate the opportunity to continue serving your needs!

To learn more, visit our new website and read our press release here.

Please wait while you are redirected...or Click Here if you do not want to wait.